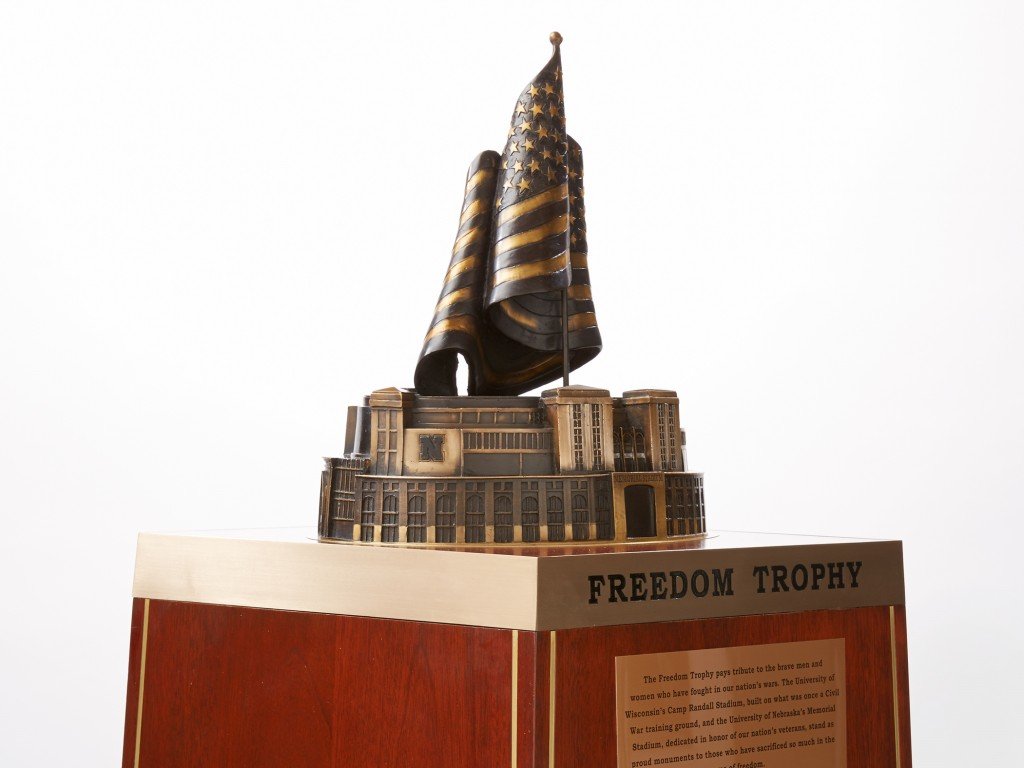 This afternoon, the Wisconsin Badgers and Nebraska Cornhuskers college football teams will square off in a key game that could determine which team represents the West division in the upcoming Big Ten Championship game December 6. It’s an important game for Badger and Husker fans—and apparently some Big Ten marketing folks have taken notice.

For the first time, the two teams will play for the “Freedom Trophy,” representing the intense rivalry that has developed between the schools over more than a century. Or not. The Badgers and Huskers have only played eight times ever, and four of those games have taken place since 2011, when Nebraska first joined the Big Ten.

It’s true that over the past four years, Nebraska and Wisconsin have been involved in some big-time games, much like the one happening later today. But can you really consider that a rivalry? It’s nothing like the clashes that have developed naturally in the Big Ten, such as Wisconsin vs. Minnesota, in which the winner takes home Paul Bunyan’s Axe each year.

There oldest trophy in the conference is the Little Brown Jug, which the University of Michigan team accidentally left in Minnesota back in 1903. By the way, they brought the jug to the game in the first place because they thought Minnesota might poison their water.

In addition to the axe and the jug, there are 15 other trophies for various rivalry games in the Big Ten, most of them dating back to the early part of the 20th century.

Compare these with the Freedom Trophy, which has been designed to represent some sort of strange combination of Camp Randall Stadium in Madison, Wisconsin and Memorial Stadium in Lincoln, Nebraska. Even the players seem less than impressed, with one Badger wide receiver politely commenting that the Freedom Trophy was “probably on a different level” than those associated with other rivalries across the Big Ten. To be fair, not everyone is against the manufactured rivalry, as Nebraska Coach Bo Pelini and Wisconsin Coach Gary Andersen have both unsurprisingly expressed their support.

It’s easy to understand the Big Ten’s thinking. Rivalries, even those that have been made up out of thin air, demand attention, as evidenced by the fact that today’s game will be broadcast on national network television. College football has become a commercial industry, and schools and conferences need to compete for fans’ attention and the enormous revenue that comes from TV contracts. By creating a new rivalry, they can capitalize financially while still appearing to preserve the natural purity and spirit of competition.