Black Friday continues to invade Thanksgiving — and it’s after Halloween, too

To me, it almost seems to be an epidemic. Every year, we see businesses begin their holiday advertising and set up their holiday displays earlier in the fall. Many retail stores already have their Christmas displays out, and it’s not even Halloween! Some stores, including the Farm & Fleet franchise in the Midwest, now begin Christmas sales in mid-October.

Within the last couple years, we’ve even seen Black Friday — the day after Thanksgiving and the biggest shopping day of the year — get pushed into Thursday evening, so that many workers are forced to leave their families to allow people to get an early start on their perceived savings. And while it seems like this has been going on forever, studies by the National Retail Federation and other organizations indicate that it wasn’t until 2005 that Black Friday consistently became the year’s biggest shopping day. 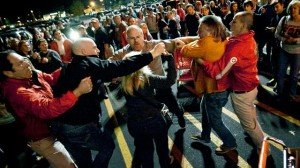 So what is it about our present situation that has encouraged businesses to push their holiday sales earlier each year?

The answer seems to be rooted in the rise in online shopping. Because shoppers can purchase items at low prices from the comfort of their own homes, retail stores need to do everything they can to keep up around the holiday season so that they don’t lose all of their Christmas shoppers to online retailers like Amazon.

However, as we’ve seen in recent years, more businesses have jumped aboard the Black Friday train, meaning they are not only competing with online shopping with their sales, but they’re also competing with each other. This is why we’ve seen Black Friday start on Thanksgiving night, and why many stores are already rolling out sales and holiday ad campaigns in the first couple weeks of October.

It’s interesting to hear the reactions of everyday consumers to this trend. Many people are quick to voice their displeasure when they see Christmas decorations out in stores before all the leaves have hit the ground, but many of these same people will take advantage of these early sales. These are businesses that need to make money, and the demand is obviously there.

So the one big question here for small retail business owners is: “Do I have any other choice than to join this trend?” The answer is yes!

One way you can gain some positive attention for your company while still offering sales during the actual holiday season is to join in the movement to “Stop Black Friday from Invading Thanksgiving.” Let your customers know that you refuse to force your workers to leave their families on Thanksgiving night, but you still intend to offer great sales during the holiday season. Many businesses have already taken this approach, and consumers seem to respond positively to the idea that a company is treating its people right.

Although the trend of the holiday season starting every year won’t likely stop anytime soon, you can do have opportunities to differentiate yourself during the chaos. And remember, Black Friday is less than a month away!

Tim Backes is a senior editor with ProPRcopy, a firm that provides copywriting services to businesses and organizations around the world.