On Twitter, everyone’s a comedian. The social media platform is flooded by people making snarky comments, most of them unfunny and a good chunk downright offensive. For brands, Twitter is like a Happy Hour networking event — you can relax and be a little less formal, but you still need to be somewhat professional to maintain your reputation.

So is it OK for your organization to be a little snarky on social media? The answer is yes, but it’s important to tread lightly.

The toilet paper brand Charmin turned some heads recently when it tweeted a picture ofits “spokesbear” dressed up as Thor, the god of Thunder and the star of the blockbuster “Thor: The Dark World,” which is now in theaters. Along with the photo, Charmin’s tweet read: 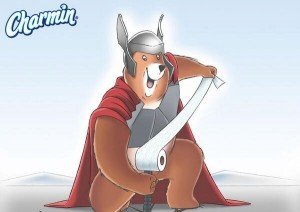 For the most part, the Twitter universe thought the tweet was hilarious and it grabbed a lot of positive attention for the brand. Charmin followed up by deleting the tweet, likely in an effort to generate even more buzz rather than to respond to any type of controversy. In fact, the brand has quite a reputation in the past for its pun-based toilet humor on its Twitter feed.

Other brands haven’t been so lucky with humor. The GAP, for example, tried its hand at a joke when it told the people of the Mid-Atlantic region to stay indoors and shop online during Superstorm Sandy. Funny? Not so much.

This shouldn’t necessarily dissuade you from using humor on social media, however. The marketplace is cluttered, and brands have to do more than simply broadcast marketing messages to the masses. If there’s a way to incorporate a little innocent humor into your tweets, you should do so. Just make sure you think about what you’re writing from all angles and make extra sure your followers and customers won’t take offense, no matter the context.

And remember — unless you’re Charmin, keep your Twitter humor out of the toilet.

Steve Bailey is the executive editor of ProPRcopy, one of the nation’s leading providers of copywriting services for blog content, web copy, press releases, articles, social media and more.