The government shutdown is finally over, with the reopening announced through a speech from President Barack Obama. During the speech, the president cited the problems the shutdown had caused, the frustration of the American people over the two main political parties’ inability to resolve issues and what he feels can be resolved in the future.

If we take politics out of it for a moment, most of us would admit that President Obama is a great public speaker. In his speech after the shutdown, there were a number of messaging techniques he used that can help us gain a better understanding into how we can best communicate, especially to a disgruntled audience in a crisis communications situation.

The *almost* all-inclusive “we”

In his speech, the president touched on the fact that the shutdown happened because of divisions between the Democrats and Republications, and a failure to negotiate to resolve them. However, he also focused largely on the solution that was developed to reopen the government, rather than just the problem. He also used the word “we” frequently, reflecting the concerns most Americans have about the shutdown and the inability of the two parties to work together. 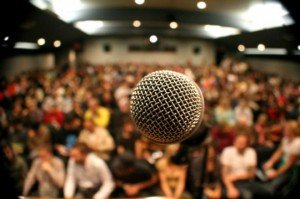 Organizations dealing with a crisis situation can take a lesson from this approach. If your company has had to conduct a product recall, for example, it’s important to focus on solutions over problems. That’s because, while your audience wants you to take responsibility for your brand’s mistakes, you should work to diffuse the anger by briefly identifying the source of the problem and then immediately specifying how you will keep it from happening again.

Here’s also where you can do better than the politicians, who prefer to speak in generalities. When it comes to solutions, your organization should be specific. Tell your audience exactly what you’re doing to make things better and what they can expect from your brand in the future — just make sure you follow through on what your PR department promises.

While being specific is not necessarily an evident quality of politicians, the greater commitment that you can make to your audience, the better – so long as you follow through.

If you’ve ever read George Orwell’s essay, “Politics and the English Language,” you’ll notice a certain trend in political speeches: they avoid action verbs. For example, instead of saying “The government spent money,” a politician might say, “Money was spent.”

In this way, the speaker can reference the issue without casting blame. Although it’s somewhat of a sleight-of-hand trick in the political world, using passive rather than active language can help you explain a problem without blaming any one particular person or entity. Using the product recall example, your company spokesperson might say something like, “Key mistakes were made,” rather than, “Our product designers made key mistakes.” This not only avoids placing blame, but also allows you to collectivize the problem — your entire organization, and not just one aspect of it — is taking full responsibility.

Let’s face it — the government shutdown was pretty frustrating. However, by taking note of the communication tactics used and evaluating their effectiveness, organizations can better prepare themselves if they need to respond to a crisis situation.

Allison Lewis is an associate editor with ProPRcopy, a copywriting services company that works with thousands of businesses and organizations across a wide range of industries.