Halloween is a fun time of the year when brands can get truly creative in their marketing strategies. Whether it’s through traditional advertising or content marketing, late October presents a great opportunity to reposition a brand’s messaging in a fun, creative and even slightly scary way.

Here are some of our favorite Halloween marketing campaigns we’ve seen pop up in recent years:

For many years, Snickers has run some funny and quirky Halloween TV spots. In 2012, it debuted the “Horseless Headman,” whose hunger has apparently prevented him from thinking clearly about how to effectively scare trick-or-treaters. The kids in the ad take pity on the Horseless Headman (played by Ezra Buzzington), giving him a Snickers.

He then transforms back into the Headless Horseman and is able to scare the trick-or-treaters once more. New York agency BBDO created the ad for Snickers.

Tide’s 2013 Halloween marketing campaign made us of numerous six-second Vine videos, featuring its detergent inserted into a wide range of horror classics. Each Vine ends with the tagline: “Stains better be scared.” In the campaign, the brand referenced well-known movies like “Psycho,” “Carrie,” “The Shining” and “The Ring,” among several others.

Pizza Hut: How to Win at Halloween

Last year, Pizza Hut unveiled an online video offering “tips” for how people could do Halloween right. One of those tips—perhaps unsurprisingly—was to give out full-sized pizzas, rather than candy, to trick-or-treaters. The brand supplemented the video by offering “stackable content” on Twitter throughout the week before Halloween.

It makes sense that Pizza Hut would go big on Halloween—it’s one of the company’s top five busiest days of the year.

Two years back, the Ford Motor Company created a fairly simple video in which actors dressed as monsters scared people going through a car wash during a test drive. To date, the video has more than 1.8 million views on YouTube. More importantly, users shared it widely on Facebook, Twitter and other social media platforms.

For a seemingly small investment, Ford was able to grab a lot of people’s attention online.

As Chipotle continues to rehab its image, it’s offering $3 “boo-ritos” for anyone who comes into one of its stores wearing a costume on October 31. The offer is available from 3 p.m. to close at locations in North America and Europe.

The campaign comes on the heels of last year’s effort, which pointed out the “scary” ingredients found in most fast food. 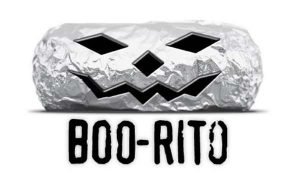 As you can see, Halloween presents a unique opportunity for brands to reach consumers in entirely new ways. What are some of your favorites?